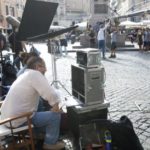 Italian cinema is coming to Cyprus! In the context of the “Italian Film Days” six among the most intriguing recent Italian films will be screened. The official opening will take place at the Rialto Theatre in Limassol on Wednesday 19 September with the movie L’Esodo by emerging Italian filmmaker Ciro Formisano.

Through the story of Francesca, a fifty-eight year old “exodata”, played by Daniela Poggi, the film deals with one of the most current and dramatic Italian theme.

After their long and passionate relationship ends, Claudia and Flavio have different ways of coming to terms with the loss.

One sister wants children and can’t have them, another can have them but doesn’t want them. With help from one doctor they decide to do the unthinkable and live a double life in front of their family.

The story of a mother forced to face a dark reality to save her child. Nicole is a woman who is careful to control her life down to the smallest details. Lucy, her daughter, is a solitary and problematic 8-year-old girl.

Sandro and Luciano work as waiters, but they feel that their life in Italy has no perspective. They decide to travel to Cuba, to open an Italian restaurant…

Three young people in an ill-fated love triangle get caught up in the turmoil of Italy’s partisan resistance during World War II.

The films are in Italian with English subtitles! Free entrance